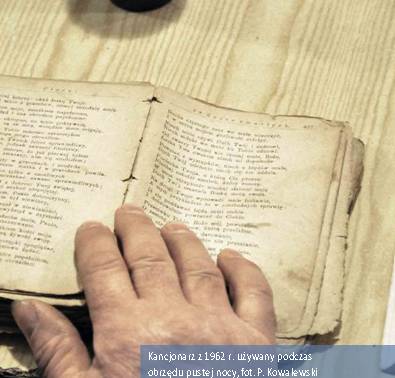 Traditions without which Kashubians cannot imagine celebrating occasional or regular holidays are still being cultivated. Most of the customs are associated with celebrating the liturgical year, others have interesting, pre-Christian origin, while the most recent customs migrated from Germany in times of the Partitions and Kashubians assimilated them in their own way.

The Sanctuary of Our Lady of Sianowo looks extremely colorful during two annual Marian Church Fairs (the first Sunday after July 16th and Sunday after 8th September). Many people come to the celebrations in traditional Kashubian costumes and some parts of the mass are celebrated in the Kashubian language.

On Christmas Eve and New Year’s Eve a fancy dressed group walks from house to house. During the first night they are called Gwiazdka (Kashubian: Gwiôzdczi) while during the other Gwiżdże. Grandfather (Dziad), Grandmother (Baba), Death, Father Christmas, Policeman and other characters perform a show accompanied by music, sometimes do trick on hosts.

Easter Monday, that is Dëgùs, only recently began to be associated with water. Traditionally young girls have their legs whipped with juniper or birch twigs.

During the Sobótka night (summer solistice) in some places is still being cultivated the custom of beheading a red kite (species of a bird). Nowadays it is staged with a puppet, not a real animal. A red kite as an embodiment of all evil is subjected to a trial during which each participant can blame the bird for everyday life nuisances.

In certain areas the rite of a so-called ‘empty night’ (pusta noc) is still being cultivated. During night which precedes funeral in the dead person’s house gather the entire family, relatives and neighbours, sometimes even the whole village to sing until morning and watch the body of the deceased. In the parish of Sianowo the empty night is also celebrated at the tomb of Christ on Good Friday.